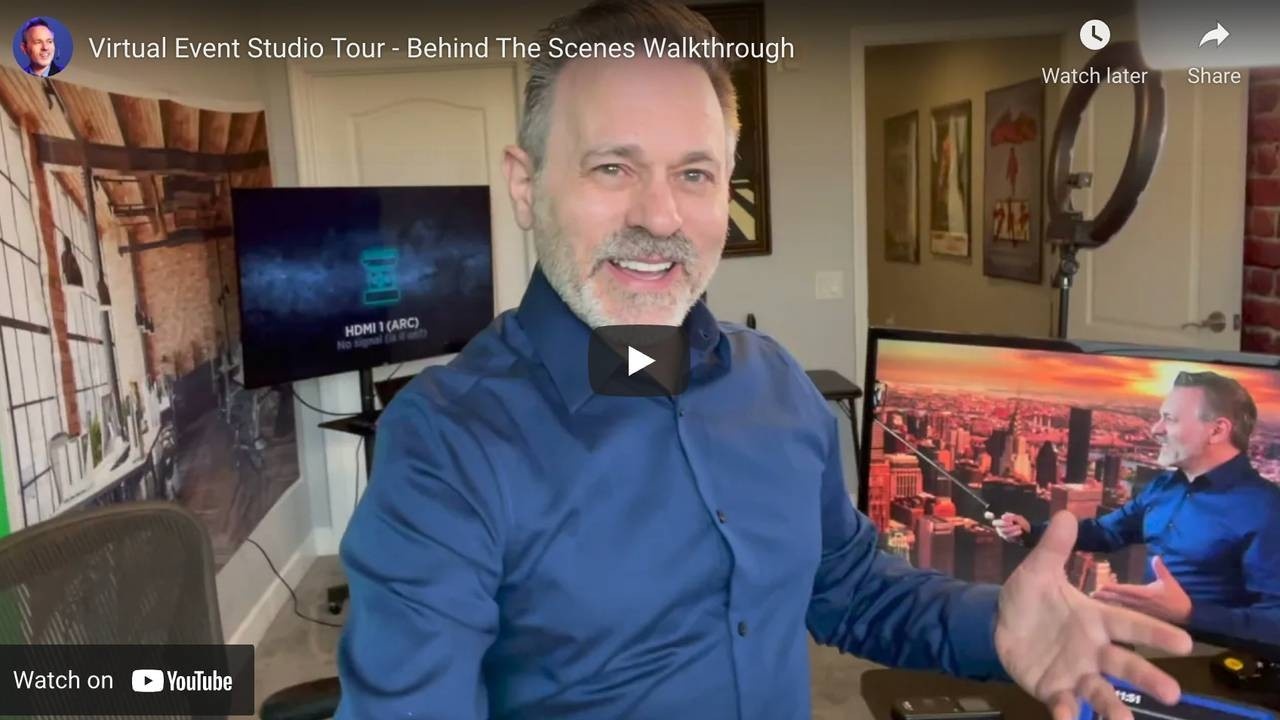 Today I'm going to take you "behind the curtain" and give you a walk through of my virtual studio where I do hosting, emceeing, shows, keynotes, workshops and trainings from three different setups that I have permanently positioned in this studio. So come on, let's check it out!

Studio One: Virtual Trainings and Workshops

The first setup is the one that I use for virtual trainings and workshops. If I had the camera set up right now, you would have no idea that this isn't a real office. People think this is actually where I work! I'm able to move this screen in and use a clicker, just like I would if I were on stage in an actual conference or event. Very handy for the trainings.

Now, moving on to studio set up number two. This is the one that I use for cameo shout outs, as well as promoting events. I'm doing a cameo, actually about three of them, right after this, and I've got the setups right there.

I'm promoting a show that I'm doing tomorrow, so I'll come right behind this ring light and say, "Hey, don't forget to sign on early to the event, we're going to have a great time," and so forth.

Over here, this is where my assistant sits and runs off of a separate computer to showcase people, pin them in the Zoom, answer questions, and let people in from the waiting room.

Now onto the main setup, which is the green screen and computer and all this gear over here. I used to have this green screen on a rack. I found it much more difficult to light. I find it very amazing that by just putting a piece of fabric directly on the wall like this and lighting it properly, even with some wrinkles, it's completely invisible!

I'll show you what I mean. I've got seven different screens here, performing different functions. And here I am. There I am right there on the green screen and you should not even be able to tell. It's a seamless illusion.

So what else do I have set up here?

Well, this is 27 inch iMac and it's running a Stream Deck, which I have programmed to run all the various programs and formats that I've got.

The secondary monitor is used to spotlight and pin people.

And I've got a teleprompter up here with an iPad bouncing off the glass. It does double duty as a third, tertiary, monitor if I'm not using the teleprompter, when I'm just doing a show or I'm interacting in a Q&A. I can actually look directly at the participants on that screen rather than down at the computer. Although I don't need to look down very far because this is a standing table so I can bring it right up to eye level. Oh, also I'm running the teleprompter off of this BlueTurn foot pedal so I can start, stop, advance, and go back if I'm running a script off of that teleprompter.

For the wireless microphone, I use a Shure, the same kind I would use in live events. And this Shure wireless mic is running into a Behringer mixer that allows for much better audio quality because it's got an XLR connection and I've got all kinds of adjustments that can be made here. And none of this is taking up any processing power on the computer! It's running into the back right next to the Stream Deck, which I've used to program buttons which run all the different speeches and shows. When I do the hosting and emceeing of an entire virtual conference, this really comes in handy to keep everything moving smoothly and produce it like a live event.

I've also got music. The music cues right off of this remote controlled receiver called an Audio Ape in the back, which a friend of mine invented. And I've got a little belt pack remote so that I can trigger the music at the ends of effects or in between presentational elements. Really makes it much bigger and better show production!

I can fly props in and out off of this elevated tray system and I've also got standing tables that are easy to bring in and out, too.

You guys are seeing the green screen rather than what I'm looking at, which is this virtual background, which always looks really amazing because I can change that background, bring the props in and out, and change the scenes as well. When I'm doing the virtual game show, that really comes in handy. When I'm doing virtual keynote speeches, it keeps everything very visual.

I'm lighting all of this with a couple of LED panels, which also have their own remote control as well. And although you can't see it right now, I've got other lights in the back, lighting the green screen from below.

Also, I should mention that back here, filming the whole thing behind the teleprompter is my favorite camera, the Sony ZV-1. I've got three different cameras that I use in various setups here, but that's the primary camera. The ZV-1 is always up on that tripod there behind the desk.

One other important thing, bounce cards. I pull these bounce cards up in front of the windows to get rid of the light in the background because I live in a nature preserve in Florida, which is very beautiful, but sometimes it messes with the lighting. So I've got to block that out when I do daytime events.

So that's about it. That's my virtual and hybrid studio with all three setups for virtual shows, virtual keynote speeches, hosting and emceeing online events. I do it all from this home studio here in this nature preserve on the coast of Florida.

If you have any questions or you're interested in finding out about my services, you can contact me here. I'd love to talk to you. 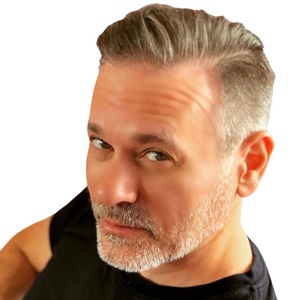